I am the happiest mother alive today. Hayden’s prognosis has always been tentative. A child with restrictive lung disease coupled with pneumonia is not a promising mix. But today he gave me the best surprises; early mother’s day gifts if you will.


First when I got here, I learned that his CO2 was the lowest it has been since he arrived on March 6th. It was 79. I also learned that his chloride was back to normal levels. Dr. Kitterman had found chloride in Norway that we could bring in if we need it, but now we don’t and I am so happy. Hayden has lost all of his edema, fluid swelling and is back to a normal weight. The only thing left to fix are his lungs. The darn respirator is still on really high settings. On the respirator the lines show yellow when he initiates a breath and red when the respirator breaths for him. Currently it almost always shows red lines, which is the hardest part to see because he now has so much energy and is almost back to his old self.

The second best thing was when Hayden and I were talking about his birthday and doing some planning for it. I told him that the hospital is going to let us use their special kids technology room to have small family birthday and Hayden announced that he wanted to walk there instead of going in a wheel chair. Wow! How cool is that. I told him that we should start practicing because he has not walked for 2 months. So he decided right then that we wanted to try to stand up and we got him up out of bed with a lot of help from the nurses and he stood up. A little wobbly on his legs and I held him to make sure he didn’t fall. But oh boy, that was really cool. The best was yet to come…..

Hayden decided right after that he wanted to go out to the patio so we got him into the wheel chair and rolled him out there with all of his IV’s and meds and a mobile ventilator in tow. We sat out there for a little while and he got a great visit from his special friend in Kindergarten, Mac Swergold and his mom Dawn. We decided to show Mac where we were going to do Hayden’s birthday. So we rolled Hayden in to the Technology Room with Mac and then we went on to the Playroom to check it out as well. The Playroom was closed, but our friend Loni the dog was hanging out there. It was then that Hayden decided he wanted to try walking so holding on to me, we got him out of the wheel chair and Hayden took two small steps on his own. It was so great to see the determination in his face. I was so proud of him.

The best was the last. Brought him back to the room and after a quick rest on the bed, Hayden announced that he wanted to try to walk again. This time we got him out of bed and he held onto my arms while he walked to the window and looked out. Its about 10ft from the window to the bed. It’s the first time he has been able to look out the window. And after about 5 minutes of checking out the view, he turned around and we walked back to bed. I swear it was just like watching your baby take their first steps. I was so happy I was crying. And when I told Hayden that I was crying because I was so happy and I got the biggest grin from him which made me cry even more. I’m surprised he didn’t roll his eyes at me!

That kid amazes me! Miracles can happen. 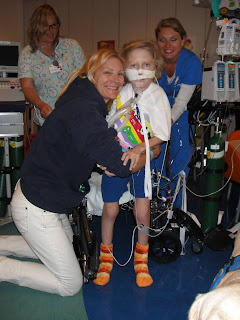