So you may be wondering "What happened to "Family Meeting #2? I never read a post on that one." Well I didn't write about that one because it was too depressing, but I'll tell you about it now. Family meeting #2 was about 3 weeks ago. It was the meeting where the doctors told us that basically Hayden wasn't going to make it and there was nothing more they could do for him. John and I were so very upset....lots of tears were shed. But we both told the attending doctor that how could he tell us this news when Hayden at that very moment was playing Wii in his room. We told him that we just can't believe that what he was telling us was true. It was just so devastating.

I tell you the gods were shining down and the power of prayer was working because from that point on....I just know that (and I'm not that religious) God whispered in Hayden's ear "Show them that they are wrong." ...Hayden's respiratory stats started to improve. And when I told him his birthday was coming up, he got another spark and announced that he wanted to walk! And you all know how the birthday went....FABULOUS!! Hayden showed those doctors that they were wrong and it was so beautiful to watch.

Family Meeting #3 was to talk about what the options are for Hayden now. We were told that Hayden would need to be on a respirator for the rest of his life....another statement John and I sort of knew deep down and it was still hard to hear. But we also still believe that there is a long shot that Hayden could get off the respirator and the doctors confirmed that miracles do happen. The doctors highly recommended Hayden have a tracheostomy. This would enable him to move around more safely. He also could possibly go home. When you say? They say maybe three months, maybe more, maybe less, but that is also a huge guess on tne doctors part. All depends on how well Hayden's lungs continue to heal.

So after the meeting, we told Hayden about the trach. He was sad and scared. We cried together because we are and he is even more so, sick of being on the ventilator, being attached to tubes, frustrated about not being able to speak, eat or drink. Its more than any 11 year old or any child should have to go through,

So many tears, so much frustration. How do I make my boy smile again? The solution walked right into the room. A nurse named Linda was with us that day. She had told us that she had run the Bay to Breakers with her boyfriend and during the course of the run her boyfriend had been running next to a naked man...Linda of course had taken some pictures. I asked her "do you have any pictures of your boyfriend running next to the naked man in the Bay to Breakers?" and she smiled wickedly as she pulled out her iPhone. "Hayden you want to see something that should never happen?" she asked. A small glimmer of a smile started to spread over Hayden's face. Linda showed Hayden the pictures. So funny!! Hayden started laughing. So hard in fact that he started getting tears in his eyes. HA!!! We laughed for a good five minutes at the funny pictures and talked about how people really shouldn't be running naked!.

The trach is scheduled from next Wednesday at 2pm. Remember to say a prayer for Hayden during that time. We hope it will be the next chapter for Hayden towards getting better and getting out of here. 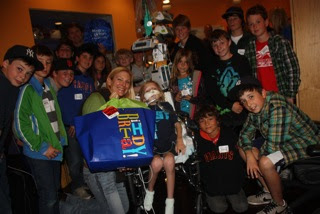